Bird watching in our backyards is an enjoyable and simple activity for everyone.

The Purple Martin – waterfront residents have placed special bird houses to encourage the Purple Martin. Not seen since 1948, it is believed the Starling population overran the Martins. With the help of this initiative from local birder Arnold Ski we await the return of the purple martin.

Each summer the flowering Purple Loosestrife is monitored and pulled up from our community’s Lily Lake. Thanks to Anne Clemence, Dree Broderick, June Malaka, John Field, Dale Jackson, Barbara and Paul Kappeli, Ryan Logtenberg and Joe and Solveigh Harrison who regularly help out on these muddy but fun days. Researchers at UBC recommended the small beetle, Gallerucella Calamariensis, be transported housed and released on Lily Lake in 2002. Its only diet is the invasive Loosestrife plant. Each year we inspect the shores of Lily Lake and we are gradually removing the spreading plant from the area.

Every December the PH&DWS participates in the world-wide Christmas Bird Count. Tony Greenfield, our Sunshine Coast Birding expert, and other enthusiasts lead groups of birdwatchers by boat and on foot to count and record birds along our coast. Thanks to John Field, John Dafoe and Paul Jones and others who take our groups out whatever the weather!

In June, when summer arrives on the Sunshine Coast, members and friends enjoy our annual picnic at a home, garden or park.

The PH&DWS then breaks for the season and we meet again in September.

Invasive plant species are everywhere on the Sunshine Coast, in our parks, our backyards, in road side ditches and along our waterways. They overtake our native flora, clog wetlands, smother ancient trees, cause soil erosion, and contribute to wildlife habitat loss. Some species are toxic, some create a fire hazard, some diminish property values and one makes jams, jellies and pies. To bring awareness to this issue, we have created a poster with information on how to remove and properly dispose of 12 invasive plant species commonly found on the Sunshine Coast. For each species, we also provide suggestions for alternative plants. 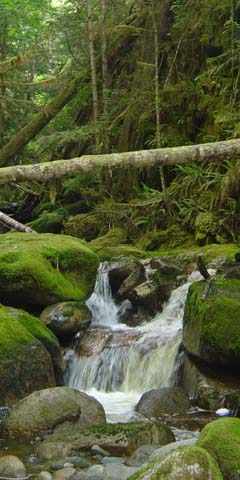 The Salmon Hatchery at the Lions Park was an important and pioneering project. It was built by volunteers with funds donated from the Pacific Salmon Foundation, Daiwa, the Vancouver Firemen as well as help from the UFAWU. Personal donations were also a great help in the construction of the Hatchery. Thanks to the Pender Harbour Lions Club for the use of the site.

John Field was on site to manage and maintain the water flow. It was thanks to his efforts that the project was a success.

Billy Griffith, former Society president and local fisherman, was champion of the Salmon enhancement which focused on Coho eggs from Anderson, Myers, Mixall and Haskins creeks. Salmon were raised and kept for up to a year, then released in the spring. Due to the success of the hatchery, habitat protection and restoration, it has not been necessary to restock the local streams as there is now sufficient natural spawning for good returns every year.

In 1979, the PH&DWS was formed especially to create this park - thanks to the rallying efforts of Edith Iglauer Daly and hard work by Bill McNaughton and others. The land was donated by Wilf Harper and the park was named in honour of our late friend and local fisherman John Daly. Their foresight helped protect the important Anderson Creek which runs through the Park to Oyster Bay. This is one of the largest salmon runs on the Sunshine Coast and salmon can be seen there every autumn. Salmon bring other wildlife to the park such as raccoons, bears, eagles, owls and hawks. The park is now managed by the Sunshine Coast Regional District.

The Society worked hard in 2010 to protect Pender Harbour's only accessible Old Growth Forest stand from being logged. This forest was identified by the federal ministry of environment as containing the only "Old-Forest" ecosystem between Sakinaw Lake and Sargent Bay Provincial Park. The blue-listed Red-Legged frog population as well as some endangered ecosystem types can be found in Bear Bay Forest. We were successful at saving 25 acres from the original cut block plan, a small but none-the-less important victory.

The Society was instrumental in protecting this ocean front parcel in Garden Bay after Fred Claydon died and the acreage was up for sale. Thanks to the late Tom Barker and others this parcel was converted to a Provincial Park. A small dingy dock was built by volunteers who also cut trails so that boaters and hikers could enjoy this waterfront property.

Situated centrally behind the Post Office and Fire Hall in Madeira Park, this wetland was created with the Pender Harbour Growth & Development Partnership. Thanks to the late Tom Barker, Jim Cameron and others, who spearheaded the project, the Society now holds the foreshore lease. The wide boardwalk, seats and signage create a quiet and fascinating place for residents and visitors to spend time. It is named in honour of the late Iris Griffith our friend and founding Director of the Society.

In Oct 2013 our members were busy in the wetland. A baffle was installed in the beaver dam to keep the marsh from flooding and the fish ladder was cleaned out. We have also banded the trees surrounding the area to keep the beavers from cutting them all down. New interpretive signs were also installed along the boarkwalk. Thank you to Target Marine and Larry Curtis for donating the materials.

The Ruby Lake Lagoon Society was established to preserve and enhance the natural habitat and wildlife of the Ruby Lake Lagoon, to facilitate local environmental education and to assist in monitoring the ecological health of the region.

The Lagoon Society built the Iris Griffith Interpretive Centre to provide diverse public education programs and events, and conduct a variety of environmental stewardship activities on the Sunshine Coast. The centre displays a 3D topographical model of the region built by UBC students. Funds collected by the PH&DWS in memory of Iris Griffith in 2002 were donated and are acknowledged on this display.

The Lagoon Society has grown out of efforts and support of many PH&DWS members.

In December 2006, the Lagoon Society was generously awarded $4,000 funding from the FBCN towards the downstairs classroom/science laboratory area at the Iris Griffith Interpretive Centre. The Wildlife Society had approached the FBCN for this grant which was made in recognition of Iris and Elaine Griffith as well as Kay Beamish.

In 2012, the PH&DWS was awarded a Club Support Grant from BC Nature and BC Naturalists' Foundation in the amount of $3000. This money was then donated to the Iris Griffith Nature School Program to help with transportation costs of the children to and from the centre.

Thanks to the dedication of wildlife rehabilitators Clint and Irene Davies of the Gibsons Wildlife Rehabilitation Centre, local wildlife have a chance at recovery should they be injured or abandoned. Transport, co-ordination, assistance and information are all ways the Society assists at this end of the Coast. Members are encouraged to support and promote wildlife rehabilitation in every way possible and we enjoy regular contact and updates on progress with the animals.

The goal of the Sunshine Coast Wildlife Project is to take action to conserve, restore and enhance wildlife habitat on the Sunshine Coast and implement on-the-ground threat abatement measures to ensure the survival of species at risk.